The Little Pin that Could In 2012, I moderated a National Stationery Show (NSS) seminar called “Top Bloggers Talk Stationery Trends.” My panel was an impressive group to get in one room: Oh So Beautiful’s Nole Garey, The Stationery Place’s Lyndsey Wells, SIMPLESONG Design’s Suann Song and Kristen Magee of InvitationCrush.com and Papercrave.com.

At one point, Song talked about using Pinterest in order to detect what trends are really capturing consumers’ hearts. This is savvy logic, and since then, I’ve pinned a great deal in both my account and that for Stationery Trends. Every time something I’ve shared has been repinned, I duly make a mental note of it while shaping my coverage.

But none of my pins ever caught on like wildfire — that is until very recently when I innocuously repinned an image from Calligraphy by Jennifer. It depicts a black envelope meticulously addressed in white. You can see it for yourself here.

Since I pinned it, it has been repinned 372 times and liked 43 times, my all-time record. The next most popular pin from that board, called The Envelope, has been repinned just seven times. So what makes this pin so special? I called the company’s Jennifer Gillespie to get her thoughts, and in what can only be serendipitous, she said she was just mulling that pin’s popularity herself. “For starters, calligraphy is not a dying art as some people say,” she told me.

I wholeheartedly agree, and even the most casual observer of the stationery industry can attest to the popularity of handwritten, and specifically calligraphic fonts. But this script is one of the prettiest I’ve seen, and doesn’t have the dowdy, dated quality that many calligraphers unwittingly veer into. Another key element is that it is in white ink on a black envelope.

So what does all this tell me? It is not enough to just have great stationery, the envelope is all-important as well — and if it can tie into the chalkboard and handwriting trend with flair, you’ve got a winner on your hands!

The moral of the story is that Pinterest is more than just sharing pretty pictures; it is a tool to hone in on trends and consumer preferences. Social media is not just about putting things out there and promoting yourself, it’s about information gathering as well. So why don’t you pin a few favorites from this issue, for example, and see how your customers respond? What a Girl Wants... Looking Back, Looking Ahead... 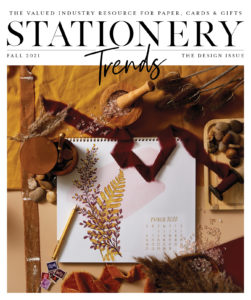