Kristina Karlsson: ‘Never take no for an answer’

Swedish-born Kristina Karlsson started luxe stationery brand kikki.K, going from one store in 2001 to more than 100, across five countries 16 years later. SBS reporter Sarah Abo sat down with Kristina to discuss the opportunities and challenges of the stationery business in the modern age.

SA: What was the process of starting up your first store in 2001?

KK: I met my partner Paul, at an Austrian ski resort, and then I came to Australia with him, and I wasn’t really sure what I was going to do. It was a big deal for me, moving from Sweden to Australia.

So in the middle of the night, I think it was 3am in the morning, I woke up Paul for the fifth time that night, saying “what am I going to do with my life?”, and he was a bit over it, and said, “why don’t we write down what’s important to you?”

I took out a piece of paper, and I just wrote down what’s important to me, and I call that my ‘3am List’.

I wrote that I want to drive to work every single day and love it,I wanted a business on my own, I wanted to have a connection with Sweden, I wanted to work with Swedish design and I wanted to make $500 a week.

I love interior design, so I went out to buy some products and back then, I felt like everything was price-driven, and in my view, badly designed.

I thought, this is kind of boring, but then I got super excited and I rushed home to Paul and I said, “I know exactly what I’m going to do! I’m going to open up my own beautiful Swedish-designed stores specialising in stationery.”

And he thought I was crazy, but eventually, I convinced him to sell his house to open the first store in Melbourne Central.

SA: So you recognised a hole in the market that you wanted to fill?

KK: I went to Yellow Pages, and I went to every manufacturer, every printer, paper company, any stationery manufacturers. They all thought I was mad, because I was talking about having stores around the world, but I had no idea about how to put together a notebook so it’s been a big learning curve.

SA: How many stores, how many countries are you currently in?

KK: So we’re in five countries, we’re in Australia, New Zealand, Hong Kong, Singapore and the UK. We just opened the UK two years ago, so that’s our newest market, and then we launched into Nordstrom, in the US, this year.

The UK is where we are focusing on at the moment, and we opened our first store in Covent Garden, but we have five stores there now and obviously our online has been growing as well. We are now in St Pancras, which is the terminal to go to Paris, so we are reaching a lot of European travellers as well.

SA: And so for you, bricks and mortar is just as valuable, just as important as having an online presence?

KK: Yes, absolutely.  So I think it’s super important to have both, so, we’re always focused on experience and the world-class service. We train our team members to deliver really good service every single time. In terms of how we recruit people, it’s really about the attitude of the people working in the stores, because if you love and are passionate about the product, then they’re easy to sell.

We were very early about selling online, and we now sell to 143 countries, I think that’s unbelievable.

SA: Over the years I imagine there must have been offers from buyers, for Kikki.K. How did you manage that?

KK: We have had some offers, but I started this to drive to work every Monday and love what I was doing, so I haven’t been interested to sell because I love it so much and I feel that it’s very much a part of me. 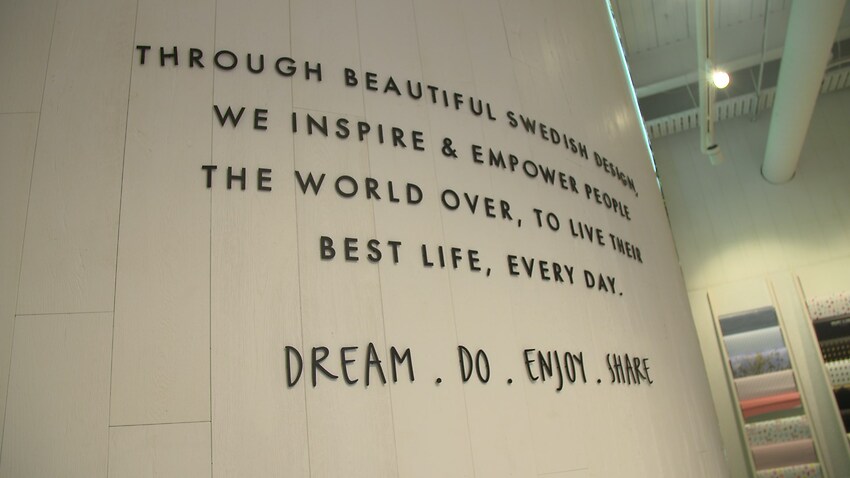 SA: What were some of the challenges you faced?

KK: The challenges overall, like we all face the same thing, going global, it’s the complexity, and having warehouses and all the logistics and all that kind of stuff when you have a global business it’s obviously very challenging, and for me personally, in the early days, I had no idea about retail, so I reached out to all these people to kind of understand it and learn it and I still read at least a couple of books every week and I never ever stop learning.

I think all our products should help you to live your best life, and if that’s about setting up your own business, or do whatever you’re doing, in the best possible way, and absolutely enjoying your life, then I think, if we can help with that, then we have ticked off what we are here to do.

SA: What’s your advice to others starting up a business?

KK: What I’m most excited about, is our purpose, which is to empower and inspire people the world over, to live their best life, every day. If you really want to do something, there is always a way, but sometimes you have to go sideways and find the way. ‘Never take no for an answer’ is something that I think is just vital when you start, because there’s so many ‘no’s’ and there are so many obstacles.